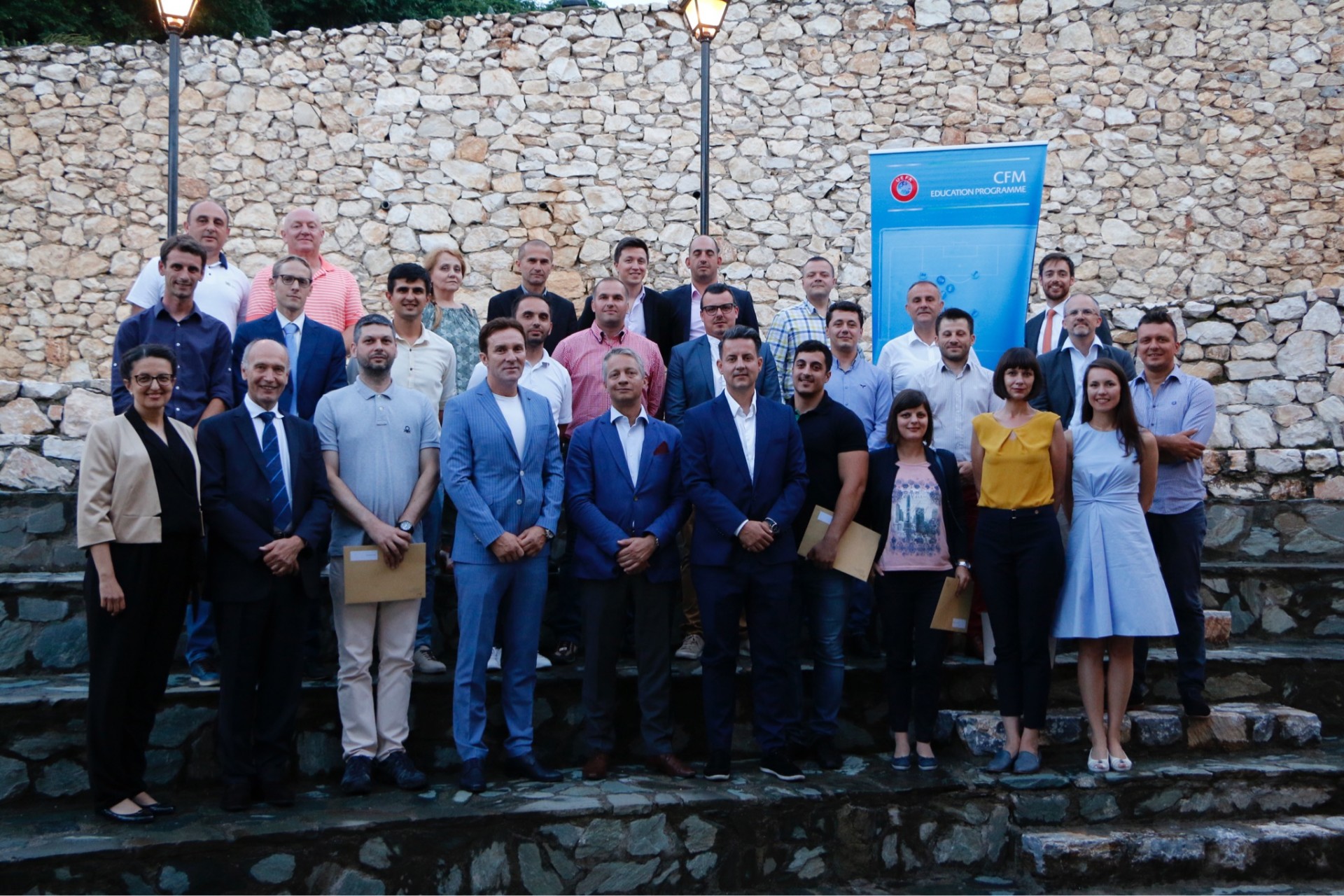 The Football Federation of Macedonia has successfully implemented the first Macedonian edition of the UEFA, CFM – Certificate of Football Management. Among the course participants there were employees of the Football Federation of Macedonia, representatives of the administration of the clubs in te First Macedonian Football League, as well as international representatives of the administration of football associations in the region. Under the auspices of UEFA with knowledge transfer of high level UEFA experts in different fields, and in cooperation with IDHEAP – Swiss Graduate School of Public Administration - Université de Lausanne, the Football Federation of Macedonia hosted this nine-months education for professionals in the field of football administration that through three face-to-face seminars, six online modules and an oral exam achieved a certificate that will contribute to higher professional commitment in their everyday work, and in direction of development of the game of football. According to the words of the UEFA General Secretary, Mr. Theodore Theodoridis „Contributing to the professional management of football across Europe has been one of UEFA’s goals for many years. Following the success of its Certificate in Football Management at international level, UEFA decided to develop national editions of this programme in partnership with some of its member associations, spreading all across Europe.

This approach has enabled more members of the football family to access the programme, to develop professionally and to acquire new management skills specific to this sport. UEFA is delighted be working with the Football Federation of Macedonia to offer this course to people involved in football in Republic of Macedonia. We are sure that this initiative will contribute to the success of the game in Republic of Macedonia.“

At the very end of the nine-months program the participants that successfully finished the education were awarded certificates by Mr. Thierry Favre, Chief of National Associations Development at UEFA, Mr. Ilcho Gjorgjioski, president of the Football Federation of Macedonia and Mr. Alain Ferrand PhD., full professor of sport management at the University of Poitiers, France, and Director of the Executive Master in Sport Organisations Management (MEMOS)..

„ I’m proud of  all the employees and representatives from the clubs that were part of the program.

Football Federation of Macedonia and UEFA rely on your knowledge and we believe that you will contribute to the success of the game in our country.

Congratulations to all of you that you worked hard in the last nine months and I hope that your increased  knowledge of football and management will make your everyday work more efficient and joyful and that you will share your new skills with your colleges.“ – said the President of the Football Federation of Macedonia, Mr. Ilcho Gjorgjioski at the award ceremony. Here is what some of the participants had to say about the program in their testimonials:

“These 9 months were really a great experience. I learned a lot from the best in football. Everything was perfectly arranged from behalf of both UEFA and the FFM. I created a lot of friendships and a great working network, which already help me to arrange international events. I would strongly encourage everyone who has the chance to enroll in the program to do it and try and get as most as they can from the program. I loved every minute and I believe that this is a stepping stone for my professional path in football.“ – Nikolay Lavchiev, International Department, Bulgarian Football Union.

"CFM for me and FC Rabotnichki – Skopje represents a great experience and an excellent opportunity to be a part of the most modern educational program of an organization such as UEFA.  The knowledge and experience of the most eminent professors of the University of Lausanne and the UEFA representatives is of a great importance for my future career, but above all an opportunity to gain knowledge that are necessary for successful operation of FC Rabotnicki in the future. Apart from the educational and examination part of the course, the nine months of cooperation with my colleagues from other clubs, FFM and the associations of Greece, Bulgaria and Kosovo were very important to me. I would also like to thank the Football Federation of Macedonia for the opportunity they gave me and FC Rabotnicki to be part of this educational program of UEFA. I hope that all of us in the future will contribute to even bigger development of Macedonian football" – Nenad Monev, General Secretary, FC Rabotnichki - Skopje.

„UEFA CFM program enables a modern and detailed overview of the key elements in the football management. The seminars in combination with the UEFA online platforms and the relevant literature have brought me an interesting and overarching introduction of the bases and the essence of the football federations’ management.

This program is an excellent opportunity for increasing my theoretical knowledge, to improve my personal skills, but also to support the further professionalization of the federation as a whole, implementing the experiences of the specific job positions“  - Viktorija Todorovska, finance department, Football Federation of Macedonia.