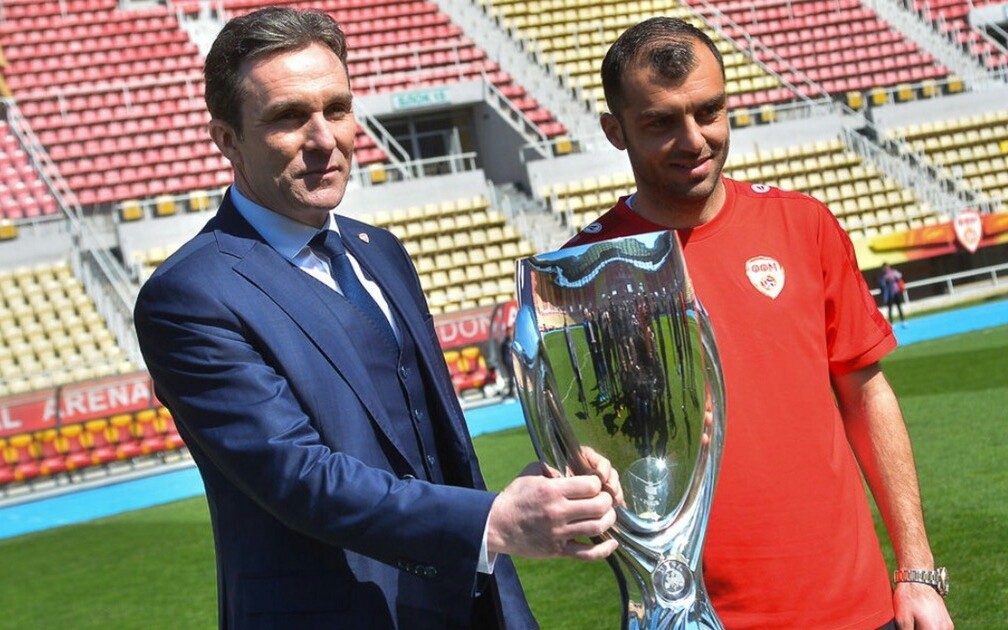 The best Macedonian football player Goran Pandev was officially presented as ambassador of the UEFA Super Cup, SKOPJE 2017 that will be played on the National Arena in Skopje on 8 August, 2017.

- As you all know Skopje and the National Arena will host a big football event - UEFA Super Cup on 8 August. It's a match that will be played between the best two teams in Europe, the winners of the UEFA Champions' League and UEFA Europa League. We at the Football Federation of Macedonia are proud to have earned the chance to organized the biggest sport event in our history so far. We would like to thank UEFA for the confidence, The success of this event will open doors for organizing events of similar profile in the future. One of the basic principles of UEFA is to develop football in all parts of Europe, for us it is very important that through this event we as Football Federation contribute in the bringing of football closer to the fans and supporters, stated the President of FFM, Ilco Gjorgjioski.

- For me, and I believe I speak in the name of all Macedonians, it is honor to have one of the biggest ambassadors of Macedonian Football of all times to be the ambassador of the UEFA Super Cup in Skopje. I officially present Goran Pandev as Ambassador of the UEFA Super Cup, 2017. Goran, you played the Super Cup with Inter in 2010, we all cheered for you and expected you to lift the trophy in Monaco. You didn't manage to do that then with Inter, but your role now is much more noble. I want to congratulate you that now, at home in Macedonia you are going to lift this big trophy and you are going to promote the UEFA Super Cup and our country as host of the event, stated Gjorgjioski.

Goran Pandev stated that the Football Federation of Macedonia has granted him a great honor and that he will do his best in promotion of the event that will take place in Skopje this summer.

- I would like to thank you for the confidence. It will be a great honor to be Ambassador of the UEFA Super Cup, Skopje 2017. We all know that this game will be played between the winners of the UEFA Champions' League and UEFA Europa League, and it will be a great pleasure to see the two best European clubs in Skopje, said the best Macedonian football player. I would personally like to see a game between Manchester United from the Europa League and one of the quarterfinal duel between Barcelona and Juventus, said Pandev.

However, I know that we are going to be good hosts for every team that comes to Skopje. To all my friends from Juventus and their supporters - if they win the Champions' League - I can only say that they will be warmly welcomed.